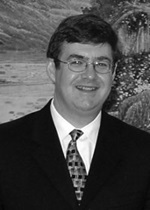 Richard joined Angell-Demmel in 1996 after a ten-year career with the Ohio law firm Porter, Wright, Morris, and Arthur. A certified public accountant (non-practicing), he concentrated his legal practice on mergers and acquisitions as well as tax and business planning for commercial and nonprofit organizations.

Richard and his wife, Sylvia, have been married for 25 years. They have two sons, Nathaniel (18) and William (16), who attend Hargrave Military Academy. The Anglin family attends Apex Community Church in Kettering, Ohio.