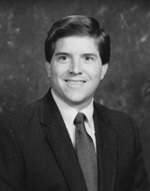 Since April 2004, Russell C. Weir has served as services delivery executive for IBM Global Services — ITS Public Sector. His key mission there is to completely restructure the “go-to-market” model for services delivery.

Weir specializes in improving existing business processes and aligning information technologies to improve business cycle time and quality. The major focus of his time has been in the transportation industry, concentrating on back-office automation and optimization of the people and processes.

Weir started with IBM Global Services in 1991, when he developed a consulting group focused on the workflow marketplace. Before that, he spent 12 years working in several other capacities with IBM.

Weir’s accomplishments include working with a major trucking company to streamline their claims process (saving the company an estimated $1,200,000 per year and impacting the company’s profit margin by 7%); improving an operational imaging system for a state Workman’s Compensation group (saving the group more than $6,000,000 each year); and streamlining the billing department of a major trucking company, causing them to go paperless and save more than $1,440,000.

Russ earned a B.S. with honors in electrical engineering technology from Oklahoma State University. He has received several IBM Marketing and Technical Excellence Awards for the success of his projects.