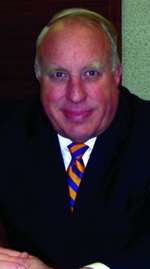 Robert D. Burris joined Burris Logistics in 1966 and was appointed president of the company in 1980.

Robert and his wife, Susan, have three children and seven grandchildren.