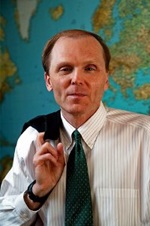 Clayton D. Beck serves in Brussels, Belgium, as director of finance for Sonoco Alcore, a subsidiary of Sonoco. In this role, he leads the finance organization and serves with other leaders in directing business objectives in the United Kingdom, Western and Eastern Europe, Scandinavia, Russia, Turkey, and the Middle East. Sonoco is a $4 billion multinational corporation providing innovative packaging solutions and services for many of the world’s largest consumer and industrial companies.

With more than 20 years of management experience in Europe, Latin America, and the Asia-Pacific region, Mr. Beck joined Sonoco after several years with Helmerich & Payne International Drilling Company. While there, he completed an intensive management training program that included nearly one year as an oil rig crewman. He then went on to serve in management positions in Colombia and Venezuela.

Throughout his career, Mr. Beck has received numerous awards for distinguished service and achievement, including Sonoco’s Champion Award for Customer Satisfaction Through Excellence. He also received the Globalization Award for leading a team that successfully designed and implemented a global management reporting and analysis system.

A native of Chadron, Nebraska, Mr. Beck is a 1981 honors graduate of Cedarville University with a degree in business administration. He earned an M.B.A. from the Mason School of Business at the College of William and Mary and completed an Executive Development Program at the Stanford Graduate School of Business.