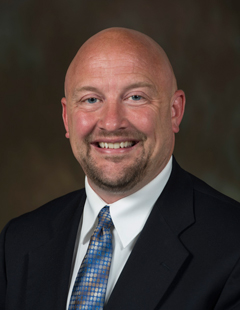 A native of Ohio, Dr. Sweeney attended Ohio Northern University where he was an academic all-conference cross country athlete and graduated with distinction with a bachelor of science in pharmacy. He continued his education at The Ohio State University, earning his doctor of pharmacy degree. Following his doctoral degree, he completed an academic leadership fellowship at the Ohio University College of Osteopathic Medicine. He also possesses a Masters of Divinity from the Southwest Bible College and Seminary.

His academic experience includes full-time teaching appointments at Ohio Northern University and the University of Findlay along with a variety of teaching assignments. At Ohio Northern, one of the nation’s largest pharmacy schools, Dr. Sweeney served as a clinical pharmacy professor in addition to directing the experiential education and advanced practice components. When the University of Findlay decided to start a pharmacy program, he was recruited to serve on the leadership team, ultimately functioning at Findlay as chair of pharmacy practice and co-director of continuing education.

A certified palliative care specialist, Marc brings a wealth of pharmacy experience to this role. His professional positions have included responsibilities in palliative care, oncology, home care, long term care, ambulatory care, and community pharmacy. Areas in which he has researched, published and presented include drug interactions, pharmacy practice, education, and patient safety. He has received more than $400,000 in grant support since 2001. Dr. Sweeney has also been active in and honored by a number of professional organizations, including the Ohio Pharmacists Association, where he served as president in 2004–2005.