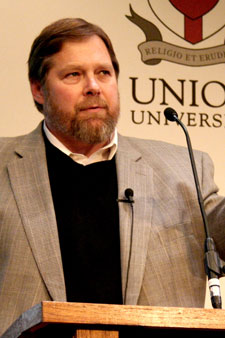 C. Ben Mitchell is Graves professor of moral philosophy at Union University in Tennessee and editor of Ethics & Medicine: An International Journal of Bioethics.

Prior to joining the Union faculty, he taught bioethics and contemporary culture for a decade at Trinity Graduate School in Deerfield, Illinois, a suburb of Chicago, where he was also director of the Center for Bioethics & Human Dignity from 2006-2008.

Mitchell has done additional study in genetics for non-scientists at the Cold Spring Harbor Laboratories, Cold Spring Harbor, New York and has twice been visiting scholar at Green College, the medical college of Oxford University.

He was a member of the Templeton Oxford Summer Symposium on Religion and Science (2003-2005).

In addition to his academic work, Mitchell also consults on matters of public policy and has given testimonies before policymaking groups including the U. S. House of Representatives, the Institutes of Medicine, and the Illinois Senate. He has published in major news media, including the Washington Post and is interviewed regularly on radio and television, having appeared on National Public Radio, Fox News, MSNBC, and others.

Dr. Mitchell is currently serving as co-editor of the Zondervan International Dictionary of Christian Bioethics to be published in 2012.