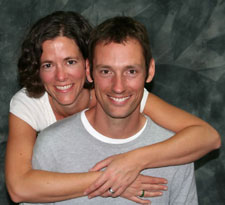 Devon Berry is a professor at the University of Cincinnati’s College of Nursing. He graduated with a degree in Nursing from Cedarville University in 1995 and then earned his Master of Science in Nursing at Case Western Reserve University in Cleveland, OH. In 1999, he married Beth and began teaching Nursing at Cedarville University. After earning his Ph.D. from the University of Washington, he joined the faculty at the University of Cincinnati. He serves as the Chairman of the Elders at Clearcreek Chapel in Springboro, Ohio and has oversight of the Youth Ministry. Beth serves alongside Devon with the youth. She also cares for their 2-year-old son, Reuben, manages the household, and enjoys occasional professional work as a physical therapist. Beth and Devon are expecting their second child, within the next few months, via adoption.