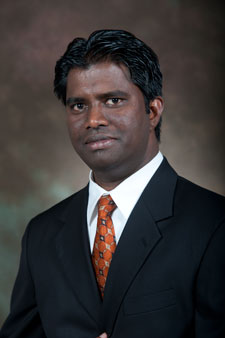 Dr. Injeti earned his B.S. degree in pharmacy and his M.S. degree in pharmacology from Andhra University in Visakhapatnam, India. After three years teaching pharmacology and physiology at St. John’s Pharmacy College in Bangalore, India, he pursued advanced studies at Loma Linda University in southern California, earning a post baccalaureate certificate in biomedical and clinical ethics as well as a Ph.D. in pharmacology. During this period, Dr. Injeti also served as a predoctoral fellow at the Center for Perinatal Biology at Loma Linda University School of Medicine. Upon completing his doctorate, he returned to teaching, accepting a visiting Assistant Professor position at the University of Toledo in Ohio. Dr. Injeti currently serves as the Director for Research and Development at the Cedarville University School of Pharmacy.

Dr. Injeti’s research interests, of which he has several publications, include vascular pharmacology, drug interactions, and pharmacokinetics. He is actively involved in engaging current bioethical issues from a Christian world view, and also enjoys tennis and biking.