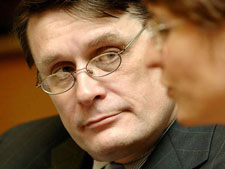 Nigel M. de S. Cameron is President of the Center for Policy on Emerging Technologies (c-pet.org) in Washington, DC, and a Research Professor at the Illinois Institute of Technology. He was formerly founding director of the Center on Nanotechnology and Society, and Associate Dean at Chicago-Kent College of Law in the Illinois Institute of Technology. His books include Nanoscale: Issues and Perspectives for the Nano Century (ed. with M. Ellen Mitchell, John Wiley 2007). He has been a visiting scholar at UBS Wolfsberg in Switzerland, a featured speaker at the Aspen Ideas Festival, and a participant in the US/European Commission dialogue on Perspectives on the Future of Science and Technology. He has also represented the United States as bioethics advisor on US delegations to the United Nations, and is a member of the United States National Commission for UNESCO. A native of the United Kingdom, he has studied at Cambridge and Edinburgh universities and the Edinburgh Business School.