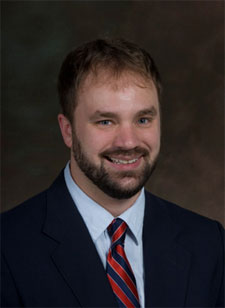 His research interests include theories of epistemic justification, the effect of disagreement on the epistemic justification of one’s beliefs, philosophical theology, the concept of personhood, the nature of moral perfection, consequentialist theories of morally permissible action, consumerism and moral complicity, animal ethics, and the ethics of killing (particularly at the margins of human life). He has presented his work at a number of professional societies and conferences, including meetings for the Society of Christian Philosophers, the Society for the Study of Christian Ethics, the Evangelical Philosophical Society, the Central States Philosophical Association, the Ohio Philosophical Association, and the Knowledge, Belief, and Normativity Project.

His wife, Marlena, is both a writer and the residence director for Murphy Hall, a women’s dorm at Cedarville University. Together, they live in an apartment in Murphy with their little girl, Iliana. They enjoy good long walks with each other and spending time together with students and good friends.