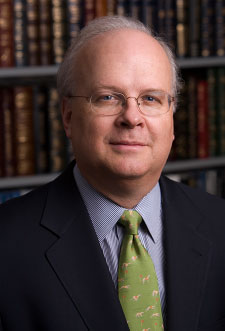 Karl Rove served as Senior Advisor to President George W. Bush from 2000–2007 and Deputy Chief of Staff from 2004–2007. He now writes a weekly op-ed for The Wall Street Journal and is a contributor to Fox News.

At the White House Rove oversaw the Offices of Strategic Initiatives, Political Affairs, Public Liaison, and Intergovernmental Affairs and was Deputy Chief of Staff for Policy, coordinating the White House policy-making process.

Before he became known as "The Architect" of President Bush's 2000 and 2004 campaigns, Rove was president of Karl Rove + Company, an Austin-based public affairs firm that worked for Republican candidates, non-partisan causes, and non-profit groups. His clients included over 75 Republican U.S. Senate, Congressional, and gubernatorial candidates in 24 states, as well as the Moderate Party of Sweden.

Rove has taught graduate students at UT Austin's Lyndon B. Johnson School of Public Affairs and undergraduates in a joint appointment from the Journalism and Government departments at the university. He was also a faculty member at the Salzburg Seminar. He was previously a member of the Board of International Broadcasting, which oversaw the operations of Radio Free Europe and Radio Liberty, and served on the White House Fellows regional selection panel. He was also a member of the Boards of Regents at Texas Women's Union and East Texas State University.