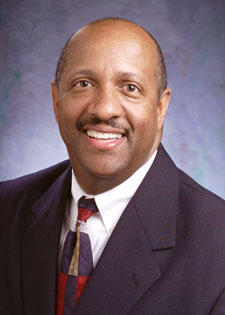 Kim A. Robinson serves as President and CEO of the National Underground Railroad Freedom Center. A 28-year veteran of P&G, Kim retired as Vice President of Customer Business Development in February, 2010. Determined to give back to a community in which he was so blessed, Kim then joined the Freedom Center in April, 2010 as Director of Advancement. Kim became President and CEO July 1, 2011. Kim also serves on the National Board of Focus on the Family. He holds a B.S. in Business Administration from the University of Kansas, where he met Tammy, his wife of more than 30 years. Kim and Tammy reside in Liberty Township and attend North Fairfield Baptist Church where Kim teaches Sunday school to young married couples. The Robinsons are proud parents and grandparents. Their family includes Jairus Robinson; Marcus Robinson and daughter-in-law Jayme Robinson; daughter Talitha Housen and son-in-law Mike Housen and granddaughter Anaia Housen. Kim enjoys his Bible study and is an avid fan of college basketball and pro football.