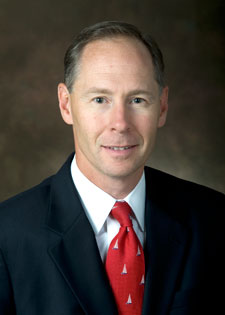 Randy Wilcox is President of the Americas for Otis Elevator Company where he is responsible for 3 billion dollars in revenue and 12,000 employees. He has held this position since April, 2007.

Mr. Wilcox joined Otis in 1981 as a sales trainee and since then has held a variety of management roles throughout North America and Asia where he was responsible for 1 billion dollars in revenue as President of the company’s South Asia Pacific Area from 2002 to 2007.

Mr. Wilcox also serves on the board of his industry trade association, the National Elevator Industry Inc., where he held the position of President from 2008 to 2011.

Mr. Wilcox received his M.B.A. from the University of Denver and his bachelor's degree from Cedarville University in Ohio where he currently serves as a Trustee. He is active in his local church and several charities based in the US and Asia.

Mr. Wilcox currently lives in Farmington, CT with his wife, Sandy. His two youngest daughters are currently in college and his oldest daughter lives with her husband in Chicago.