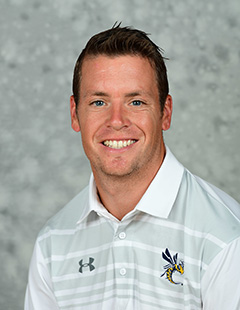 Brett Faro has been the head men’s soccer coach at Cedarville University since the 2013 season.

He guided the Yellow Jackets to consecutive Great Midwest Athletic Conference championships in 2013, 2014, and 2015 as well as the school’s first-ever NCAA Division II Tournament berth in 2015.

Faro’s teams have averaged 13.5 victories per season with four straight appearances in the G-MAC final. Cedarville has also produced an impressive 30-6-4 record in conference play.

The Yellow Jackets were 12-8-3 overall and 7-3-2 G-MAC in 2016. They finished as the conference runner-up and advanced to the NCCAA Midwest Region semifinals. Ten players were NCCAA Scholar-Athletes and 15 total were named to the G-MAC Academic Team.

Cedarville rolled to records of 15-4-2 overall and 10-2 G-MAC during 2015 in winning its third straight league trophy via penalty kicks following a 1-1 draw on the home turf vs. Alderson Broaddus.

The Jackets then posted a 3-0 victory over Quincy in their NCAA debut before falling to national semifinalist Rockhurst.

Faro was named the program’s interim head coach in July, 2013 and later had the interim tag removed in November just before the G-MAC Tournament.

Prior to becoming the head coach, Faro served as the program’s top assistant in 2011 and 2012. CU went 31-10-4 those two years while winning the 2011 NCCAA region banner and placing third at the national tournament.

Faro came to Cedarville after serving as an assistant coach at the United States Naval Academy during the 2010 campaign. He helped guide the Midshipmen to a 7-5-4 record.

Faro has been involved in multiple levels of soccer in coaching and administration. He coached the U17 Maryland Nike Rush ‘93 in 2010-11 and helped lead the NCSL Division I squad to three tournament championships.

Faro was team manager of Sky Blue FC of Women’s Professional Soccer in 2010. He also coached and trained players in the Hershey Youth Soccer Club in 2007 and 2008.

Faro was a four-year standout during his playing career at perennial NCAA Division III powerhouse Messiah College from 2005-09. He was a member of four national championship teams, was a two-time team captain, and tied the school record for the most games played in a career with 99.

Faro is a 2009 graduate of Messiah with a degree in sports management. He was a Dean’s List student at the school and was recognized as an NSCAA Academic All-Region Scholar-Athlete. 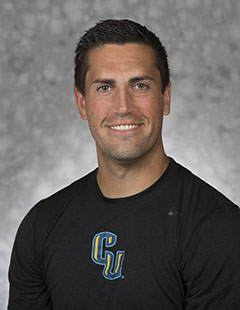 Former Yellow Jacket Grant Knight has been part of the men’s soccer staff as an assistant coach since 2011. He possesses a USSF B coaching license.

The Wellington, Ohio native played three seasons for Cedarville in 2003-04 and 2006 and was a two-time team captain. He appeared in 55 matches with 45 starts totaling 11 goals and 6 assists for 28 points.

Knight was a member of the 2006 NCCAA national runner-up squad. He was an NCCAA Midwest Region Team selection, was tabbed NCCAA All-America honorable mention, and was an NAIA and NCCAA Scholar-Athlete.

Knight, a 2006 CU grad with a degree in psychology, gained three years of PDL experience playing for the Cascade Surge in Oregon. He was a two-time team captain and served as the squad’s ministry director.

Knight had a short stint playing professionally for SV Gerasdorf in Austria and later spent time in Amberg, Germany and in Porto Alegre, Brazil training with FC Amberg and Gremio Esportivo Sapucaiense.