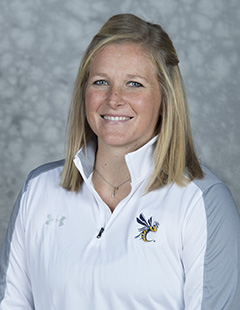 Hoffman was promoted after serving as an assistant coach with the Lady Jackets from 2010-16.

It’s the second time around at her alma mater having been an assistant for women’s basketball and softball during the 2007-08 academic year.

Hoffman has played a key role as both a player and coach in the basketball success enjoyed by the Lady Jackets.

She was named the 2017-18 G-MAC Coach of the Year after leading Cedarville to the regular season championship. The Jackets, who finished 24-6 overall and 18-4 G-MAC, were the host and No. 1 seed in the conference tournament ultimately advancing to the semifinals.

Hoffman’s first season as head coach resulted in a record of 19-11 overall and 9-5 in the G-MAC during which she guided the team to the conference tournament semis.

During her time as assistant coach, Cedarville posted a 135-50 record with two conference championships and the program’s first-ever trip to the NCAA Division II Championship in 2015.

Hoffman spent the 2008-09 and 2009-10 seasons at NCAA Division I Green Bay. She was the Director of Women’s Basketball Operations for the Phoenix, who qualified for the NCAA Tournament each year.

A native of Florence, Wisconsin, Hoffman was a three-time NAIA Division II All-American during her playing career at Cedarville from 2001-05 and was twice named to the NAIA National All-Tournament Team.

She was the 2004-05 NCCAA National Player of the Year and was a two-time NCCAA All-America First Team choice.

Hoffman was twice voted the American Mideast Conference Player of the Year and is Cedarville’s second all-time leading scorer with 2,275 points. She guided the Lady Jackets to a 124-18 record, three AMC titles, and two NAIA Division II runner-up finishes.