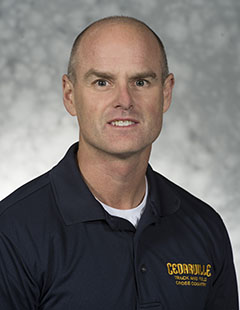 Jeff Bolender has been at Cedarville University since 2001 and has been the head coach of the Yellow Jacket men's and women's track & field teams since the 2004 season. He was named the head women's cross country coach in December, 2009.

The Jackets experienced an outstanding track & field campaign in 2012. Cedarville won the NCCAA Women’s Indoor Championship for the fifth time in school history while the men were the outdoor runner-up. Both teams won the Ohio Independent Championship.

Bolender guided the Lady Jackets to three consecutive NCCAA Indoor Championships from 2007 through 2009, the 2007 outdoor title, and back-to-back American Mideast Conference crowns in 2008 and 2009. His 2007 women’s squad was the NAIA national outdoor runner-up plus he owns a three NAIA Top 10 finishes indoors and two more outdoors.

The Yellow Jacket men claimed NCCAA indoor banners in 2006 and 2007 as well as the 2011 NCCAA outdoor and AMC titles. Cedarville also finished in the NAIA Top 10 twice indoors and once outdoors.

Bolender’s first women’s cross country team placed 10th in the NAIA in 2010 and they were also the American Mideast Conference runner-up. The Lady Jackets won the inaugural Great Midwest Athletic Conference title in 2012 and repeated as champions in 2013. 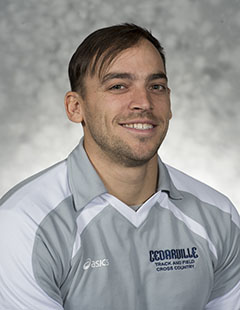 Scott returns to his alma mater after serving on staff at Hannibal-LaGrange University in Missouri. He was the Trojans’ assistant coach for cross country and track & field from 2009-13.

Scott is the most decorated pole vaulter in the history of CU track & field. He was a two-time NAIA indoor national champion and won the outdoor title once during his career from 2004 through 2007. He was a five-time NAIA All-American in the event.