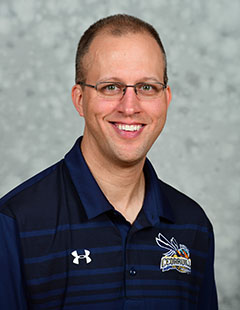 Doug Walters has been the head volleyball coach at Cedarville University since 2008. He is the sixth head coach in the program’s history and the first male to serve in the capacity.

The Lady Jackets have posted 137 victories during Walters’ six-year tenure. The list of honors includes the 2008 NCCAA championship as well as back-to-back Great Midwest Athletic Conference crowns in 2012 and 2013.

During the school’s first active season in NCAA Division II in 2012, his squad rolled to a 32-6 overall mark and was a perfect 8-0 in the G-MAC. Cedarville went on to win the inaugural G-MAC Tournament and Walters was ultimately voted the league’s Coach of the Year.

The Jackets, who finished 23-14 overall in 2013, repeated the feat after sharing the league’s best regular season record at 12-2. They went on the road to claim their second straight G-MAC Tournament trophy.

Walters’ first season with the Lady Jackets in 2008 was a memorable one as he guided the program to its third National Christian College Athletic Association title in four years. He was tabbed the NCCAA National Coach of the Year.

Cedarville finished with a 27-12 record overall that season and tied for fourth place out of 15 teams in the American Mideast Conference with a 10-4 mark. The Lady Jackets qualified for the AMC Tournament and advanced to the semifinals.

Cedarville finished with a 22-18 mark in 2011 during the school’s NCAA provisional year and was the No. 1 seed in the Ohio Independent Championship Tournament.

Walters came to Cedarville after assembling a 128-73 record in nine years of high school coaching in southern Ohio. He spent his last two seasons at the prep level at Milford High School, a Division I program near Cincinnati.

Walters previously spent seven years building Eastern High School in Sardinia into one of the top Division III programs in Ohio. The Warriors, who were ranked in the state’s Top 10 in three different seasons, won four conference titles, two sectional championships, and were the district runner-up once. He was a four-time conference Coach of the Year and saw eight players continue their careers at the collegiate level.

Walters is the founder and former director of the Greater Miami Volleyball Club. The GMVC was started in 2003 and is a Junior Olympic organization that has quickly built a reputation as one of the top regional clubs in Cincinnati.

Walters continues to be involved at the club level. He is a National Team Coach for the Elevation Volleyball Club based out of Mason, Ohio.

Additionally, Walters is the volleyball chair of the Great Midwest Athletic Conference. He serves as the G-MAC rep to the AVCA Division II Head Coaches Committee and is a member of the AVCA National Poll Committee.