Few mediums in the U.S. put a person more in the public eye than television. And few TV shows, especially among daytime audiences, place someone more on view than The View.

But it’s on this very popular, very personal, and very interpersonal stage that Paula Faris ’97 is letting her light shine with co-hosts, staff, and millions of fans.

“Never in a million years did I ever think I would be working at The View,” Faris said. “Honestly, it’s so crazy. This isn’t something I ever envisioned or imagined for myself, but it’s a testament to God. He can do whatever He wants for you, as long as you’re a willing, open vessel and you have a good attitude, even if you don’t feel qualified or capable.”

When Faris was a Cedarville University student, she imagined an out-of-the-public-eye career editing and producing video, not a high profile, everybody-knows-me role on a national television show.

“Mr. Kragel and Mr. Leightenheimer would encourage me, almost daily, to consider being an on-air journalist,” she said, referring to Associate Professors of Communications Jim Kragel and Jim Leightenheimer ’80. “I wasn’t comfortable in my own skin at that point; I wasn’t confident in who I was. But their voices were in the back of my mind.”

After graduation, she first went to work in video production, then shifted to selling airtime for a radio station in Columbus. She was doing quite well in radio sales, pulling down a lucrative salary, “but it wasn’t as fulfilling as I thought it was going to be,” she related. “I could hear their voices in the back of my mind—‘You should really consider this; you should really consider this.’”

And then 9/11 hit. “I’d been out of school four years at that point and had gotten married,” Faris said. “After 9/11, I felt that tug that God was calling me back into TV news. I felt really convicted.”

She walked away from the high-paying career in radio sales and instead followed a dream she really didn’t have for herself. “But other people had it for me,” Faris said. “It was a path I thought God really wanted me to pursue.”

“Sometimes it takes someone else seeing [a talent or ability] in you before you see it in yourself,” she added. “I love what I do!”

Faris applied for production assistant positions at every television station in Dayton, finally landing a position with WKEF/WRGT, channels 22 and 45. She assisted writers and producers, worked on the assignment desk, and ran the teleprompter. “Anything they needed me to do, I did,” she explained.

But she always had the end goal in mind: on-air reporting. So she borrowed a camera and tripod and put together a résumé video. She shot her own stand-ups—video of a reporter speaking to the camera, adding a transition or some bit of information to move the story along—and did her own interviews.

“I handed a cut résumé tape to a news director who had laughed at me months before and said it would never happen, and he said, ‘I actually like this,’” Faris said. “He knew I was proficient in producing and editing from my experience at Cedarville, so he knew he could let me do my thing and he wouldn’t have to babysit me. He said, ‘I’m going to give you a shot.’ So Dayton [Ohio] is where I broke into the industry as a reporter.”

Faris worked in Dayton for a year, then moved to WCPO-TV in Cincinnati for three years and WMAQ in Chicago for six years. She’s spent the last four years with ABC in New York, first as co-anchor of ABC News’ World News Now and America This Morning, then as weekend co-anchor of Good Morning America (GMA). And now, while still holding down her GMA responsibilities, she’s a co-host on The View, which entered its 19th season September 8.

“People ask me all the time, ‘Why would you want to work in that type of environment?’” Faris said. “My response is always ‘to be a light.’ The only way your light shines is when you’re in a dark place, right? Aren’t we called to be light? You have to go into the dark places; that is where your light is going to shine.

She’s not afraid to express her Christian beliefs and often does so while sitting at the Hot Topics Table, the semicircular desk where co-hosts share their opinions, beliefs, and values, sometimes quite heatedly. 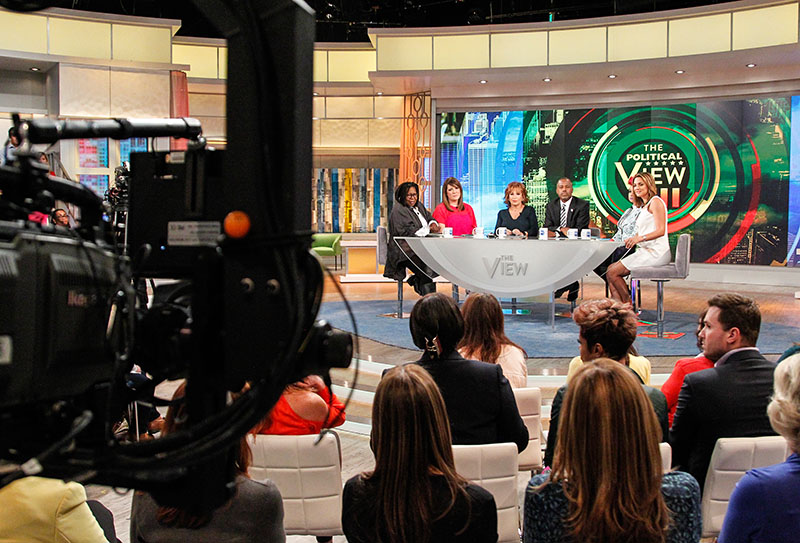 Discussions about Christianity come up often. “Within the first couple weeks [of the new season], one of our first discussions was about what it means to be born again,” Faris said. “I feel like I’m very bold in my faith, but I’m not going to push it down anyone’s throat. I want people to know that I’m a Christian by the way I treat them.”

Faris’ Cedarville education prepared her to live and share her faith, whether it’s on set, in a cab, or at home. “What I love about Cedarville is they really encourage students to think critically,” she said. “With the Bible minor and the plethora of Christian and religion courses, it really prepares you. You have an answer for the issues going on in the real world.”

From same-sex marriage to legalizing marijuana, no subject is off limits for The View crew. Faris’ perspectives on these and other topics don’t waver, but stay true to the unchanging Word of God. “Everyone thinks, ‘Oh, the world changes, and culture changes, so the Church has to change,’” she said. “I say ‘No.’ The Bible is not going to change. It’s the same yesterday, today, and forever, and that’s the beauty of it—it is the same.”

Faris also tries to witness by the way she interacts with others—with sincerity, honesty, and kindness. “The Bible says they’ll know you’re Christians by your love for one another,” she said. “What good is it if I talk about being a Christian till I’m blue in the face and people don’t know I am? I want people to know that I am a Christian by the way I treat them. I want them to know there’s something different about me, and then they’ll ask, ‘What makes you different?’ And that gives you an opportunity.”

To remain strong in the spotlight, you need Christians praying, supporting, and challenging you behind the scenes. “Before I got this job, I summoned my friends and several pastors and mentors,” Faris said. “I told them, ‘I’m going to rely on you; I want to make sure I’m a good representative for Christianity.’ It’s a big platform, but it’s an even bigger responsibility to do this show.

“Christianity is about community,” she added. “It’s about surrounding yourself with people who will hold you accountable, who will empower you and not just enable you.”

For Faris, that includes longtime Cedarville pals, as well as friends from churches in New York and Chicago. But the greatest human source of support and accountability is her husband, John Krueger ’99. They began dating in 1996 and married in 2000. They have three children: Caroline, 8; JJ, 6; and Landon, 1.

“I’m just grateful to have a very loving and understanding husband,” Faris said. “We were having a discussion on the show recently about if you could marry someone and convert religions. For me and my husband, our faith is our foundation, the glue that holds us together when we’ve wanted to throw in the towel. John is a great guy and so incredibly patient. He’s awesome.”

Having that strong relationship support, and knowing who she is apart from the fame, is crucial when she’s hit with criticism.

“When you are a vocal Christian living in an overtly secular world, you’re going to face a lot of scrutiny and attacks,” Faris said. “There will always be someone, regardless of what I say, that isn’t going to like me, and that’s OK. But I’m going to stay true to who I am. If something is written about me that’s disparaging and slanderous, I can choose what my attitude will be. To know that and embrace that is so powerful.

“The Bible talks about not being anxious, but to pray about everything (Phil. 4:6). I just have to play my game, keep my head down, and be honest.”

Ultimately, Faris’ secret to walking in the public eye comes from the way she views herself. “Some people get very wrapped up in what they do, whether it’s their career on television or in the entertainment industry,” she said. “That doesn’t define who I am. If it was taken away from me, I know my identity. My identity comes from my faith and knowing who I am in my relationship with Jesus.”

With that kind of perspective, Faris should be able to shine in the spotlight for many years to come.