Cathy told the University’s graduating class that running the race of life is about the hand-off. "You can be the best runner in the world, but if you drop the baton," shared Cathy while holding the hollow relay rod and a Bible in his hands, "you will ultimately lose the race." He challenged the class to "not drop the baton" by keeping their lives focused on serving God and others.

Cedarville President Dr. Bill Brown presented Cathy with the University’s Medal of Honor. This was only the 12th time the medal has been awarded by the University. "Dan’s life is marked by excellence, integrity, servant leadership and a clear testimony for Jesus Christ," shared Brown.

In 1967, Cathy’s father, S. Truett Cathy, founded what is now one of the nation’s largest family-owned businesses (www.chick-fil-a.com). Cathy combines a unique approach to leadership with heartfelt hospitality to personally convey his enthusiasm for service to over 50,000 employees. As president, Cathy has a personal goal to see the company fulfill its corporate purpose: "To glorify God by being a faithful steward of all that is entrusted to us. To have a positive influence on all who come in contact with Chick-fil-A."

The Class of 2010 donated fifteen thousand dollars toward the development of the "Five Loaves" scholarship. The class gift will be used to support students with financial needs. 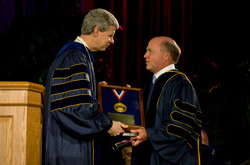 Dan T. Cathy, president and chief operating officer of Chick-fil-A®, Inc. was awarded the Cedarville University Medal of Honor. As part of his address, Cathy passed the baton of leadership to nearly 650 graduates at the University’s 114th commencement ceremony on May 1, 2010. Photo credit: Scott L. Huck/Cedarville University