When Janice (Klingenberg) Marsteller ’83 graduated from Cedarville, she never anticipated she would become a pharmacist. But God soon directed her down a new path — one that led her to the field of pharmacy and, eventually, back to Cedarville.

In 2005, Janice graduated with her Doctor of Pharmacy degree from the University of Toledo and now works for Paramount Health as a managed care pharmacist. She mostly works behind the scenes in managing biological drugs, developing various educational programs, and monitoring and reviewing patterns of drug use. With her natural inclination to challenge the status quo, it’s no surprise she finds her work rewarding. "There is so much potential in the field," she said. "I can continually look for ways to change a thought pattern, apply knowledge in a new way, or take something unnoticed and make it real and valuable."

As Janice first began her trek into pharmacy, she thought it would be a great fit for Cedarville, given the University’s strong reputation in the sciences. But she admits, "I realized it would probably never happen." When she was asked in 2007 to join Cedarville’s Pharmacy Advisory Board, she jumped at the chance. Since then, she’s enthusiastically supported the launch of the school of pharmacy, which welcomed 52 students as members of its inaugural class last fall. As she explained, "I’ve enjoyed the privilege of providing input and ideas to the building of what will become one of the best programs in the nation. I’m glad dreams do become reality, and I look forward to being at the graduation of the first pharmacy class!"

Contact Janice via e-mail. Visit www.cedarville.edu/pharmacy to learn more about the pharmacy program. 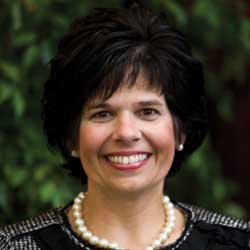