Dr. John Brewer ’91 began his career as a math teacher and in 2003 moved into a principal position in Sterling, Virginia. As the school’s first and only principal, he models a unique approach to leadership and was recently recognized as the 2010 Washington Post Distinguished Educational Leader for Loudoun County. This award honors principals who “go beyond the day-to-day demands of their position to create an exceptional educational environment.” John was also named the 2010 Loudoun County Principal of the Year.

Intentionality drives everything John does, both inside and outside the school walls, and it’s this level of focus that makes his influence so extensive. He mentors teachers by helping them identify ways to more effectively lead their classrooms and overcome challenges. He influences students by taking their concerns seriously and igniting their interest in learning. Parents see him as a role model to students and staff, a leader with character and integrity. John also earns the respect of the community by visiting neighborhoods, meeting families, and understanding their unique local concerns.

“The leadership style that God has placed on my heart has been so deeply influenced by my Cedarville experience,” John explained. “The unique and powerful culture of Cedarville — characterized by courtesy, respect, and a commitment to excellence and established by Dr. Dixon during my time at the ’Ville — is something I try to replicate at Dominion High School every day.”

John and his wife, Rachel (Ager) ’91, live in Ashburn, Virginia, and have two daughters, Belle and Abigail.

Read more about John and his influence at Dominion High School. 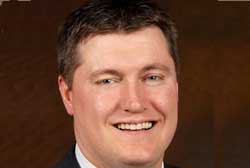