With their degrees in broadcasting, Aaron Darr ’99 and Eric Jingst ’05 work together in the Christian television industry to share the Gospel and inspire spiritual growth. And recently, their efforts to do so have received national recognition.

On February 27, their station — WLMB-TV 40 in Toledo, Ohio — received the prestigious Station of the Year Award, presented by the National Religious Broadcasters Association (NRB). Each year, the NRB honors the station that best displays innovative and creative programming; demonstrates sound financial decisions; covers local Christian events, issues, and stories; produces local programming to meet the spiritual needs of viewers; and partners with local churches and ministries. And this year, that station is WLMB. In fact, this is the fourth time WLMB has received this award, which speaks to the staff’s consistent commitment to integrity and excellence.

“I love being able to use the skills that God has given me to spread the Gospel,” Eric explained. “It’s very satisfying to wake up every morning and really enjoy going into work.”

Eric credits Cedarville with laying a foundation for his work and ministry today. “Not only did I gain knowledge of media, but I also gained the desire to use media to impact the culture for Christ,” he said. “And there’s no better way to impact culture than to evangelize and disciple people.”

The recent NRB award affirms that their diligence and focus are bearing fruit in the lives of their viewers. Aaron and Eric continue their ministry, setting an example for others in the television industry along the way. 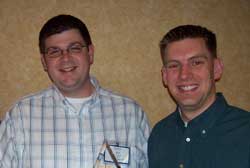