At Home on the Prairie

When John Murphy ’95 graduated from Cedarville, he knew he loved the natural world and wanted to work as a conservationist. Although Missouri wasn’t exactly on the top of his list, he’s come to love the land there. Since 2000, he has led prairie restoration initiatives as part of the Mystic Plains Conservation Opportunity Area. With his success in restoring thousands of acres of prairie ground, the Missouri Prairie Journal recently named John as Prairie Professional of the Year.

“Watching beautiful native plants emerge as a result of my efforts is an incredibly satisfying experience,” he said. “And having a wide variety of prairie animal species return to these areas is icing on the cake.”

John’s motivation for his work stems from his biblical view of creation stewardship, a perspective formed, in part, by his time at Cedarville. He praises the CU faculty for exemplifying Christian integration in their research and coursework. “I look back and see what a difference it makes having teachers that consider their professions as ministry,” he said.

In addition to his conservation work, John has recently been involved with building an orphanage in Puebla, Mexico. In fact, his passion for orphans led him to adopt two children, one from Guatemala and the other from Ethiopia.

He and his wife, Sharon (Swanson) ’93, live in Kirksville, Missouri, with their four children. 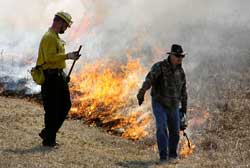