Even as a little girl, Krista Ray '10 was fascinated by the computer. But she admits, "I thought I would never be an engineer. I refused to consider it because my dad expected it."

During high school, Ray excelled in math and science and was placed in an advanced technical program under director Diane Walker who encouraged females to consider the world of engineering. Ray followed her parents’ footsteps to Cedarville University where she entered freshman year majoring in computer engineering, a relatively new program at the University.

It didn’t take long for Ray to see the gender imbalance in the incoming class: there were 80 boys and 10 girls in the whole engineering department. "I picked up pretty quick that there were a lot of guys!" she says.

As she began taking engineering classes, she realized that she had not met any other female computer engineering majors. Ray also heard that no female had completed the program. "I think I may be the first girl to do this," she thought. At her inquiry, a professor verified she would indeed be the first.

Ray explains, "I just had to show I knew what I was doing. I had to prove myself." Throughout her four years, she admits reconsidering her choice of major. "It’s a challenge, and it takes a lot of time. But I’m stubborn."

Ray graduated on May 1 as one of over 650 Cedarville graduates this year. Following graduation, she will be working at Wright-Patterson Air Force Base.

Perhaps Ray does owe her father some credit for being one of the first to recognize her skills. "My mom told me my dad cries when he is in the Engineering, Nursing and Science Center. I guess he’s proud it’s come to be." 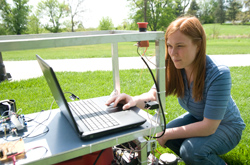