The Gabrieli Festival will be performed at Cedarville University in the atrium of the Center for Biblical and Theological Studies on Sunday, April 11, at 3 p.m.

The Gabrieli Festival is an annual concert held at Cedarville University that celebrates the work and style of Giovanni Gabrieli, a 16th-century Italian composer. Gabrieli used the unique layout of the San Marco church in Rome, with two facing choir lofts, to create music with drastic spatial effects. He placed specific instruments in different locations to strike a delicate balance of clear sound that surrounded his audience. Traditionally, the Gabrieli style is played in cathedrals, but the acoustics in the Center for Biblical and Theological Studies produce a similar stunning effect.

This year, the event will feature the Mid-American Trumpet Ensemble made up of trumpet professors from Cedarville University, Ohio University, the University of Cincinnati and Appalachian State University. Also performing will be the Miami University brass choir, and the trombone choir and tuba quartet from the University of Cinncinati. The performance will conclude with several pieces played by the combined groups, with performers placed all around the concert space. 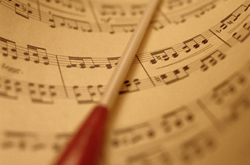