Friday, May 21, 2010
Cedarville alumnus Dr. Peter Lillback ’74 was recently featured on a nationally-broadcast news program for his book, George Washington’s Sacred Fire. Published in 2006, Dr. Lillback spent 15 years of research and focused on Washington’s own writings, letters, and those of his closest family and confidants. What he discovered was a newly inspirational picture of this Founding Father who was driven by the highest of ideals, including his genuine Christian faith.

Peter Lillback, Ph.D., is the president of The Providence Forum, senior pastor at Proclamation Presbyterian Church in Bryn Mawr, Pennsylvania, and president of Westminster Theological Seminary, where he is also
Professor of Historical Theology.

Watch a short video from the news program » 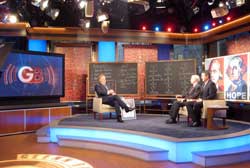 Peter Lillback '74 was featured on a nationally-broadcast news program for his inspiring book about George Washington. Photo credit: The Providence Forum.