In chapel on March 29, Mark Irving '94 was honored as the 2010 Staff Member of the Year. This annual award honors one staff member who is chosen exclusively by students.

After graduating from Cedarville, Mark went on to receive a degree from Dallas Theological Seminary where he met his wife, Meredith, who was also a student there. In 2001, a phone call from Pastor Bob Rohm '68, vice president for Christian ministries, moved Mark and Meredith to Cedarville where they have faithfully served for the last nine years.

As director of discipleship ministries, Mark oversees approximately 100 small-group Bible studies, a number of prayer groups, the Discipleship Council, and the pre-marriage counseling program Fit To Be Tied.

When students submitted their votes, they had the option of writing comments, and many of them expounded in detail on the influence Mark has had on their lives. One student said, "He is an excellent friend and mentor, a man who wants to see others grow toward Christ. He goes above and beyond his job to be there for people. He's a good man, a good leader, a good brother, and a good friend." Another added, "Discipleship groups have helped so many men and women on this campus grow in their relationships with God and allowed an opportunity for leaders to experience a stretching ministry."

Not only does Mark have an incredible reputation with students, but he also has great rapport with other Cedarville staff. One colleague said, "I always look forward to staff meetings because I never know what Mark will say next, but he usually has a witty or humorous comment to get us all laughing." He also shared, "When he speaks, people know to listen. He has a lot of wisdom to share."

In describing Mark, Bob Rohm said, "His life is an incredible testimony of balance because he maintains such appropriate prioritizing between his job, his family, and his dedication to students. Most importantly, he values his personal relationship with the Lord, and many agree he is wise beyond his years."

Mark and Meredith live in Cedarville and have three daughters, Ellie, Mia, and Emma. 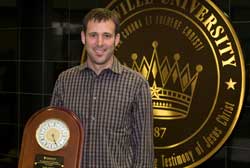