Mikhail Petukhov to Give Piano Recital

On April 11 at 8 p.m., Mikhail Petukhov will perform a piano recital in the Dixon Ministry Center Recital Hall. He will present the complete keyboard concertos of J.S. Bach accompanied by Dr. John Mortensen, professor of piano at Cedarville, on second piano.

Petukhov was born in Varna, Bulgaria, and studied at the Kiev Special Music School, winning the bronze medal in the J.S. Bach International Piano Competition in Leipzig, Germany, in 1972. This award led to his acceptance to the Moscow Conservatory of Music. Petukhov was a prize winner in the 1975 Queen Elisabeth International Competition in Brussels, starting his career as a concert performer. Beginning in 1988, when the Soviet Union began to allow international travel, Petukhov has performed throughout Europe, Asia and North and South America. He has appeared as a soloist with the Moscow Philharmonic, USSR State Symphony Orchestra, Birmingham Symphony, Berlin Philharmonic, Hong-Kong Philharmonic and many others. Petukhov received the title Honored Artist of Russia in 2002 and now serves as professor of piano at the Moscow Conservatory.

Petukhov and Mortensen will also perform at an April 15 concert at 7 p.m. presenting Bach’s C major concerto for two keyboards and orchestra, accompanied by the Cedarville University Orchestra under the direction of Jun Kim, assistant professor of music. 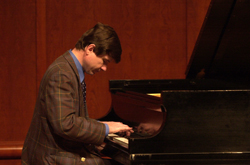