Cedarville University students recently brought home top awards at the Dayton Model U.N. Conference in negotiations with some 90 delegates from a variety of regional universities.

During these conferences, students play the role of U.N. delegates from various countries, staying in character as they represent each country’s national interests while negotiating solutions to a wide variety of global problems.

"It's a great opportunity to learn how to negotiate with individuals who have vastly different goals and perspectives than that of whatever country I represent," John Cooper explained.

Other awards were presented to "Distinguished Delegates" Clara Gebert and Michael Hall and special recognition was given to Melissa Martin, Ben Roose and Naomi Washatka. Devin Babcock also received acclaim for his paper outlining the Russian position on key General Assembly issues.

"This year is certainly finishing my Model U.N. experience with a bang," expressed Gebert. "I can safely say that it has been one of the greatest educational experiences in my time at Cedarville."

"The 11 team members put in many hours of preparation, convincingly played their diplomatic roles and were influential framers of the final resolutions passed by each of the committees," explained Dr. Frank Jenista, the team’s advisor, a Cedarville graduate, an American diplomat for 25 years, and now professor of international studies. "All deserve recognition and appreciation for their superior diplomatic skills and impressive representation of Cedarville University." 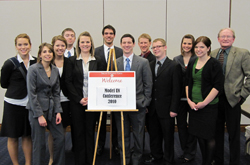