During the 114th Commencement on Saturday, May 1, 2010, two graduates were honored with the University’s most prestigious student award. The President’s Trophy, the highest honor for a graduating senior, recognizes leadership, ministry, community and campus involvement, athletic performance, and academic achievement. The 2010 recipients were Clara Gebert '10 and Jonathan Walburg '10.

During her time at Cedarville, Clara studied international studies in social science and was noted for her leadership and excellence in both academics and activities. She was involved with a discipleship small group, DAE (alumni service organization), served as co‐captain of the Model U.N. team, and was the student government association vice president. Clara is from New Cumberland, Pennsylvania.

Jonathan majored in electronic media and was highly involved in many activities and ministries. He traveled to the Dominican Republic on a missions trip and led an East to West touring team. He was active with the student academic advisory board, Resound Radio, and placed first in the National Religious Broadcasters Competition during his junior year. Jonathan is from Shafer, Minnesota.

Cedarville University welcomes Clara, Jonathan, and the nearly 650 other Class of 2010 graduates to the alumni association! 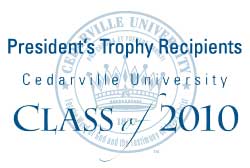