Members of the trio are Eunho Kim on violin, Marie-Elaine Gagnon on cello and Susan Keith Gray playing piano. All three women serve on the faculty of The University of South Dakota Department of Music.

The performance will include movements from three different pieces. James Lentini’s “Opposites Attract” is a composition of contrasting sounds and moving musical lines. “Trio in G,” by Claude Debussy, was thought to have been lost or destroyed but was introduced to the public in the 1980s after being found at an auction. The final piece, to be played after a brief intermission, is Johannes Brahms’ “Trio in B major, Opus 8,” the first of his four works for piano, violin and cello. 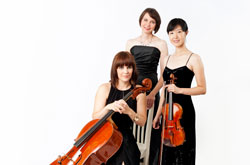