It’s not every day that a double-decker bus pulls into a Cedarville University parking lot, but on January 27 a group of 30 students, faculty, and staff piled in and headed south for the annual Civil Rights Bus Tour.

Led by dean of multicultural and special programs Carmille Akande, students took a journey through several states, stopping in three to retrace the history of the Civil Rights Movement over a five-day excursion.

Beginning in Atlanta, the group visited the Martin Luther King Jr. National Historic Site, which included stops at The King Center, his birthplace, home church and final resting place. They continued on to Alabama with stops in several cities to visit the Rosa Parks Museum, the National Voting Rights Museum and the Birmingham Civil Rights Institute, finishing up at the National Civil Rights Museum in Memphis, Tennessee.

“It is one thing to learn about history, but it is entirely different to walk in the footsteps of history,” junior Nate Davidson shared. “Marching over the Edmund Pettus Bridge in Selma, standing in Kelly Ingram Park and 16th Street Baptist Church in Birmingham, and walking through where Rev. King was assassinated in Memphis — this trip surrounded us in the history and allowed me to understand the Civil Rights Movement in an entirely new way.”

Amid all the traveling, the group took advantage of the drive time by watching several videos that either reflected on incidents of the movement or dealt with the idea of racial reconciliation in modern society.

Senior Julita Bailey remarked, “Martin Luther King Jr. and many other people who took part in the Civil Rights period risked their lives for something they believed in and knew was right. Many of these people did not see the results of their work, yet it did not stop them from continuing forward. Their sacrificial lives were very evident. They lived for God and the future of those who would come after them.” 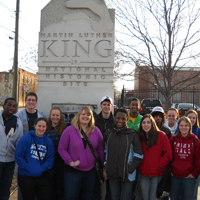 Cedarville University students stand at their first of many stops along the Civil Rights Bus Tour. Photo credit: Patrick Smith '10