As most college students were packing up and heading down the road to the familiar comforts of home, a group of Cedarville students ventured to New Orleans to kick off their Christmas break by volunteering with Samaritan’s Purse.

Resident Director Anthony Mandela was well aware of the need of those in New Orleans who were affected by Hurricane Katrina. As a Cedarville student in 2006, Mandela traveled to New Orleans to help rebuild. Now, as an alumnus holding leadership over a group of resident assistants, he saw benefit in extending a similar opportunity to his men.

“I wanted to give them the same experience that was so powerful to me,” he explained. “I wanted to broaden their experiences, expose them to new things, and encourage them to use their time and talents to serve the Body of Christ and give to those in need.”

In all, 11 men left Cedarville on December 13 for a week-long trip. The volunteers worked alongside Samaritan’s Purse, homeowners, and other volunteers from across the country painting, framing houses, securing siding, and simply encouraging people.

“I think the most awesome thing about this trip was the fact that no one ever said ‘no’ or ‘I can't’. The locals just need somebody who is willing to put in some time and hard work to help them out,” shared sophomore Collin Mitchell who is planning to return in the near future. “It was an extremely satisfying experience to look at a house and know that your two hands helped build it. There's just something about that feeling that makes it all worth it.”

On a previous trip, sophomore Robert Harrison saw a sign in the wreckage: “‘Katrina was big, but God is bigger!’ God is still accomplishing His redemptive work for His purposes in New Orleans four years after Katrina. I cherish that I was able to be a part of that work." 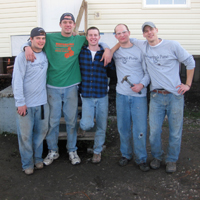 Cedarville students alongside leader Anthony Mandela (far right) stand in front of one of their Samaritan’s Purse work projects during their time of volunteering in New Orleans over Christmas break. Photo credit: Robert Harrison