After Friday's early bird sessions, special guest Travis Cottrell presented an evening worship concert, accompanied in part by a back-up choir of Cedarville students and local worship leaders. Singing songs such as "In Christ Alone" and "Revelation Song," the audience entered into worship with Travis and his band.

In describing this concert, Josh Staley '12, a worship major, says, "Rarely does anyone get to see a multitude of worship leaders, young and old, praising God together with one voice."

Saturday began with an opening session led by Cottrell, who reminded worship leaders that they had everything they needed to perform the tasks to which God had called them. In the four breakout sessions, attendees chose from a wide range of seminar topics, including Utilizing Drama in Worship, Digital Mixers 101, and Helping Worship Come Alive. The conference closed with a challenge from Mike Harland, director of LifeWay Worship, taken from John 4:24: worshipers must worship because God is great, regardless of their circumstances.

In anticipating next year's Worship 4:24 Conference, the SCBO and Cedarville University plan to again hold the conference on Cedarville's campus. 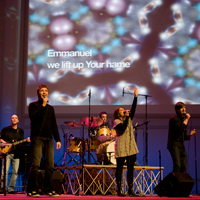 Travis Cottrell presented an evening worship concert, accompanied in part by a choir of Cedarville students and local worship leaders.