"You Can't Take It With You" Comes to Cedarville Stage

As spring fever sets in, the Cedarville University theatre department brings a light-hearted release to the stage. Cedarville will present the play “You Can’t Take It With You” beginning March 25.

This Kaufman and Hart production originally opened on Broadway in December 1936 and won the Pulitzer Prize only months later. The performance was not so much a social commentary as it was a much-needed diversion from the hard times of the Great Depression.

The play offers a comical story of life and romance as Alice Sycamore and Tony Kirby fall in love but struggle to reconcile the differences between their contradictory families.

Mischelle McIntosh, director of the performance, explained that her favorite theme of the play is that “true love overcomes any differences in family background.” The theme comes out in a drama that offers hilarious action on a complicated and realistic set.

The cast, which includes live snakes and kittens, serves up snappy dialogue with eccentric capers that will keep the audience smiling with delight through the entire performance. This comedy is the perfect chance to laugh and relax after a long winter as we welcome the light-heartedness of love with the spring. 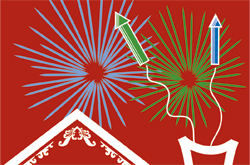 Cedarville University will present the comedy “You Can’t Take It With You” starting March 25. Graphic credit: Jacob Hand