A Stage of Their Own

For theatre faculty at Cedarville University, the hours at school are often followed by hours directing, acting, and using their talents to share their faith with the community.

The time commitment may seem insane. But ask any of them and they’ll agree there’s nothing they’d rather be doing.

Matthew Moore's love of theatre began at the age of 6, and he’s been hooked ever since.

Moore, M.F.A., associate professor of communication arts, has worked professionally as an actor for both the Contemporary American Theatre Company (CATCO) and Actor’s Theatre in Columbus, Ohio. Currently, he is doing voiceover work for Magnetic Studios in Columbus and will be playing Antonio, the sea captain, in “Twelfth Night” at The Human Race Theatre Company in Dayton. The show will run the last week of January and the first two weeks of February.

Moore has also developed a one-person dramatization of King David’s story taken exclusively from Scripture. At the beginning of 2011, Moore will launch Lamp and Light Productions, the umbrella organization for this performance and others that he plans to develop.

“One reason I pursue theatre professionally is to be able to demonstrate acting skill and not just talk about it,” says Moore. “If I’m teaching a skills-based course, I’d better have the skills.”

But it’s also about the faith which drives his passion. Moore is careful to only tell stories worth telling ... and to make sure he tells them well.

“There are callbacks that I’ve turned down as professional actor because I couldn’t be a part of what the story celebrates,” he adds. “A conservative Christian is a bit of an oddity in professional theatre, and I think in those settings you will only have impact if you’ve got skills. Make an impression as a great actor first, then you have an inroad for your faith.”

Christian Involvement in a Secular World

As a dramaturg, Merchant, professor of communication arts, studies the time period, the social climate, the setting, characters, author and culture to learn everything she can about what influenced a playwright and his work.

In addition to her involvement with CATCO and The Human Race Theatre Company, Merchant is part of the Association for Theatre in Higher Education, a professional membership organization founded in 1986 that serves the interests of university theatre departments and administrators, educators, graduate students and theatre practitioners. At the 2010 ATHE conference, she served as a dramaturg for the New Play Development Workshop. Hundreds of playwrights submitted full-length and 10-minute scripts for consideration. Merchant worked on “Pemberton” by Ron Pullins, one of the five selected 10-minute plays.

“I love dramaturgy because I love ideas,” she says. “I love that there are often ideas hidden between the lines, and I love how things from the playwrights’ lives show up unexpectedly in plays. I love seeing those connections and figuring out how that happens.”

Also at the conference, she hosted a panel — “Making a Living and Making a Difference: [A Life of] Faith in Professional Theatre — led by panelists with a shared core belief that theatre can be a useful way to address core spiritual questions.

“Believers have a responsibility to use the performing arts to challenge, provoke thought, and direct the audience toward the image of the Creator,” shares Merchant.

Investing in Lives and Connecting People

“Theatre is about life,” says Rebecca Baker, M.A., associate professor of communication arts. “It takes ideas and values and makes them accessible through the actors in front of us.”

Baker has served as a board member of the Ohio Lyric Theatre, a performing arts organization in Springfield, Ohio, that provides vocal music, musical theatre and children’s theatre experience to those in the community. With the theatre, she has directed “The Secret Garden” and “Brigadoon” for the Summer Arts Festival, and she has either acted in or helped stage over a dozen other productions, including “The Music Man,” “My Fair Lady,” “Aida” and “Camelot.” She also assists KidStage, a program designed to bring children in the community together through workshops and camp experiences, and serves as co-director of the drama program at Southgate Baptist Church in Springfield. Baker has also traveled to Kosovo on missions trips where she conducted theatre classes and performances.

“I’ve become friends with kids from schools all over Springfield as well as from inner-city arts programs,” says Baker. “My primary goal is to enhance meaningful worship through drama that explores truth, and theatre is the perfect way to do this. As we celebrate God's gifts, we find boundless opportunities to serve and honor Him through theatrical expression.” 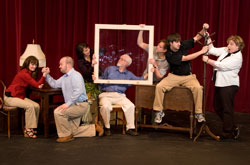 For theatre faculty, the hours at school are often followed by hours directing, acting, and using their talents to share their faith with the community. Photo credit: Scott L. Huck/Cedarville University