“Untested.” This one word described the engineering program at Cedarville in 1990. Another was “unaccredited.” Put together, these two words spelled “step of faith” for any high school senior seriously pursuing a degree in engineering at Cedarville. This was exactly where Nick Awabdy ’94 found himself his senior year … wanting to study engineering yet questioning the wisdom of pursuing that major at Cedarville.

Even with the promise of a track scholarship from Cedarville and encouragement from his mother, Judy (Siplock) Awabdy ’64, Nick had reservations. His interest was in the technical field of engineering, so should he go to a liberal arts school? An opportune meeting with a Cedarville student, a grandson of Dr. James T. Jeremiah (then Cedarville’s chancellor), influenced Nick’s decision. After learning firsthand about the quality of Cedarville’s academics, Nick took a step of faith and enrolled. He graduated four years later, fully aware that his unaccredited engineering degree could preclude him from graduate school or his dream job.

In 1990, Cedarville’s engineering program was in transition, from a two-year pre-engineering focus to a full four-year degree. Before it could become accredited, however, Cedarville had to graduate an official class of engineers — the class of 1994. Knowing the importance of accreditation, the professors were stringent and focused, giving their students a solid education while emphasizing the value of taking responsibility and working hard. Chuck Allport, Nick’s academic advisor, was a great influence. Nick remembers him saying, “If you are willing to take on responsibility, you will rise up around those you are working with” — sage advice Nick still carries with him.

During his senior year, Nick’s engineering class had the opportunity to tear apart a Saturn automobile, converting it into a hybrid-electric vehicle. (Amazingly, this project came as a grant from GM; only 12 universities in the United States were given this opportunity. Only God could have opened the door for an unaccredited, liberal arts engineering program to be part of this grant.) This hands-on experience was pivotal in Nick’s education at Cedarville. Together, his 40-member class had to leverage internal and external resources to accomplish their task. The project culminated in a weeklong competition in Detroit, where the students competed against schools such as Stanford University, Cornell University, and the United States Naval Academy. The team earned a number of awards, but they also earned credibility for Cedarville’s untested program.

With a diploma in hand, Nick had no time to worry whether his education would stunt his future. He was hired by GM shortly after graduation to work in the safety division. GM was creating an entire air bag product line; the company needed quality engineers.

In the late ’90s, Nick was asked to take another step of faith. GM needed a liaison between the company’s engineering facilities in Dayton, Detroit, and a new plant in Matamoros, Mexico. This yearlong assignment would require a move to south Texas and crossing the border into Mexico each day. God used this position to sharpen Nick’s communication and cross-cultural skills. He enjoyed coming alongside the employees — leading, coaching, and encouraging them. During this time, Nick met his future wife, Nancy, at church, where she was involved in youth and music ministries. They married a year later and moved back to Ohio when Nick’s assignment in Mexico ended.

Nick’s time in Mexico served him well. When Delphi spun off from GM, they began supplying products to automakers around the world. Nick began working with technical centers in Germany, India, China, and Korea, collaboratively developing products that would be manufactured and sold worldwide. Being able to relate to people from different cultures and backgrounds proved vital to the design and launch process of new safety technology.

A few years later, Nick felt he had a secure job. As a manager in an engineering department, he had a good team and strong relationships with his supervisors. But none of that mattered in the spring of 2009 when Delphi decided to discontinue Nick’s product line. Faced with the possibility of losing his job, he began job hunting, but God was already working to provide for him.

A vice president at Delphi contacted a friend — the owner of Indiana Mills & Manufacturing, Incorporated (IMMI) in Indianapolis. IMMI is an industry leader in the design, testing, and manufacturing of advanced safety systems, producing hundreds of products for the commercial transportation sector. Would they have a need for highly trained engineers and managers? IMMI interviewed Nick, and he was offered a position even before production ceased on his product line.

Since fall 2009, Nick has been an IMMI engineering manager, overseeing a team of 24 engineers doing safety product research and development for commercial vehicles. He shared, “God opened this door. I’m in a new environment but using my background from Delphi.” It was a position perfectly tailored for his capabilities and industry experience.

Now with 16 years of work experience behind him, Nick looks back on his Cedarville education with a new perspective. While he had originally questioned the value of a liberal arts education, he has since realized that he does much more than technical work. He reviews reports; he delivers presentations; he interviews future employees; and he interacts with people of many different cultures. His liberal arts classes prepared him for these roles. “Cedarville emphasized relationships with people, and to excel in the workplace, relationships are fundamental,” said Nick. “Because of my education at Cedarville, I was able to take on this kind of responsibility.”

God worked out the accreditation factor as well. In 1995, Cedarville’s engineering program became fully accredited, retroactively applying to the class of 1994. His education proved to be a sound springboard for him to earn his Master of Science degree in engineering from Rensselaer Polytechnic Institute and later complete the Duke Leadership Program at Duke University.

Clearly, the young engineering program had passed the test, joining the list of highly respected and challenging majors offered at Cedarville. Today, Nick has only high praise for the school he may have dismissed entirely if God had not prompted him to take a step of faith. 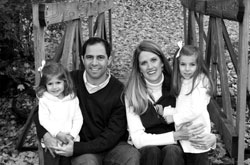