Cedarville’s participation in the American Society for Engineering Education’s (ASEE) Robotics competition provides an opportunity for underclassmen to get involved in an engineering competition early in their academic career. Clinton Kohl, Ph.D., advisor to the team, said the students must just be willing to try. The competition is unique because it is only open to freshmen and sophomores and forces the teams to work with an economical $450 budget.

Each year the competition is themed according to its location. This year’s event took place in Vancouver, British Columbia, Canada, and so the competition had a logging theme.

The competition called for students to design an autonomous robot that could “harvest” six red dowel rods that represented dead trees, while leaving six green dowel rods that represented live trees. The rods were set up in a random pattern, so the robot had to be able to recognize the color of the dowel it was approaching. To emphasize consistency, the robot had to make four runs along the track.

These runs made up the team’s testing score. In addition, the team had to make a presentation before a group of judges along with a written report.

According to Kohl, reliability is key. “You have to do the job every time as fast as you can. It’s better to be consistent than it is to go fast and miss one.” Even one bad run can take a team out of the top group.

After working for the entire year, three team members flew to Vancouver to participate in the competition. All of their work was about to be put to the test.

According to James Smyly, the team’s captain, the team was anxious to see what they were up against.

“It was nerve-wracking in the corner where the competition was held because we could see everyone else's robots,” team member Malia Amling said.

Eventually it was time for Cedarville’s robot, CedarJack, to go to work. The robot did well and completed its four runs just how it was supposed to. CedarJack finished in fourth place, behind three teams from Monroe Community College.

The competition allows students to get a feel for what being on an engineering competition team involves. “It’s a great way to get our freshmen and sophomores involved in design, involved in competitions right off the bat, developing that expertise,” Kohl said.

According to Kohl, that experience pays off. “It’s often my ASEE teams that are the captains of our junior and senior competition teams,” he said. “It’s really a feeder program for our full-fledged senior design projects and other engineering competitions.”

The competition gives students the chance to solve real-world problems in a ­­­realistic environment. Preparation for the event requires students to work in coordination with each other to solve problems quickly and efficiently.

“It was about doing something with what I'm learning in class,” Amling said. “The thing with engineering is that in class you learn about ideal situations, but the reality is sometimes different. It's important and cool to be able to model things for the robot mathematically like we do in class, but then to step back and try it and see the other factors that we can't calculate and adjust for them.”

Kohl has his eyes set on a victory with this year’s team. This team will focus on the speed of the robot. This year’s competition requires two robots that can complete a lap around a track and then pass a ball off to another robot that will complete another lap before passing the ball back to the first robot, and so on. 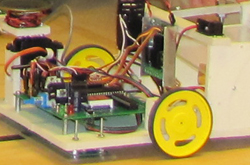 Cedarville’s participation in the American Society for Engineering Education’s (ASEE) Robotics competition provides an opportunity for underclassmen to get involved in an engineering competition early in their academic career. Photo courtesy of Dr. Clinton Kohl