The goal of the competition is to design, build and fly a remote control aircraft within design and performance requirements set by the SAE. There are three divisions: open, regular and micro class. Micro class requires a lightweight, efficient flight, whereas regular class requires a primary focus on maximum lifting capability. A winning score requires points from each category: flying, presentation and a design report.

Each year Cedarville’s team has built on the success of previous teams. The Elmer W. Engstrom Department of Engineering and Computer Science has entered the competition with teams stretching back to 1991. Each year the team has progressed on the work done the year before to get to where they are today.

This year’s team competed in the micro class division, in which the goal is to design and build a remote-controlled aircraft that can lift the highest payload fraction. This is determined by dividing the total filled weight of the plane by the empty weight of the airplane. The team needs to build an airplane that is light but still powerful.

The students received design requirements in August, designed from September to December, built their plane from January to February and tested the plane in March for the competition in April.

“Each of us had our own work to focus on, be it wings, tail, body, landing gear,” Daniel Ormsby, the team’s captain, said. “At the same time, none of these parts of our plane can function without interacting with or attaching to all the others.”

The team learned that communication was crucial. “Testing your design and going through a redesign process prior to competition is the secret to success,” according to Tim Norman, Ph.D., Cedarville University professor of mechanical engineering and faculty advisor for the team. “The team learned that things don’t always go as planned. In those situations, team leadership and chemistry is key.”

Ormsby recalled one situation when team chemistry was essential. “One time our plane wiped out on the runway and broke our main wing and part of the tail.” Fortunately the team had brought enough spare parts to build two other planes in case of a breakdown.

“We were able to pick up our plane, replace these parts and then make a successful flight before the round was over for full credit,” Ormsby said.

The competition is designed to provide students with exposure to the kinds of situations that engineers face in the real world. The team spent several hundred hours working together on this project throughout the year.

The future looks bright for the competition. “Interest in aeronautical engineering at Cedarville is growing,” Norman said. “This year, a large number of our freshman engineering students are interested in aero design.” 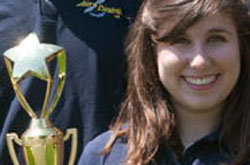