Kim Ahlgrim, director of the Academic Enrichment Center—also known as, “The Cove”— at Cedarville University, received the Staff Member of the Year Award for the 2010 –11 school year.

At Cedarville since 1989, Ahlgrim has always had a deep care and concern for her students and peers. She is often noted for her enthusiasm and passion when helping students succeed academically and spiritually. Ahlgrim has made a tremendous impact on the students she mentors. One student wrote about Ahlgrim, “She wants to see students shine and achieve the best they can. She believes that this is very possible, which gives every student she interacts with a positive outlook.” Ahlgrim’s peers have also noticed her care and enthusiasm and selected her as the 2009 honorary Cedarville alum. 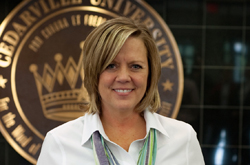 Mrs. Kim Ahlgrim, director of the Cedarville University Academic Enrichment Center, received the Staff Member of the Year Award for the 2010–11 school year.