Along for the Ride

Jane (Adams) Weakley ’04 is on track to turn her recreation into a vocation. Just months after she began cycling for exercise, she entered her first race ... and won! “From day one,” she said, “I was hooked.”

Last year alone she raced 41 times all over the country and qualified for the Nature Valley Grand Prix in Minneapolis. That race, held in June, was a five-day, six-race event that gave Jane a look into the world of professional cycling. She had a solid finish for her first professional race, which drew the reigning Olympic gold medalist and the world’s top-ranked road racer.

Jane cultivated her natural athletic ability playing soccer at Cedarville, and she sees a direct connection between the two sports. “People may not realize that cycling is a team sport,” she said. “All the years I played soccer really do translate in many ways. There are moments when you can have a lot of individual success, and moments when your hard work allows someone else or the team as a whole to achieve success.”

The physical conditioning she experienced in soccer is paying off as she continues training. “Many top female cyclists have come from successful collegiate soccer experiences,” said Jane. “I believe it’s the commonality of using your legs as your primary power and performing intervals during the duration of exercise. During a race, or a soccer game, you have to be able to sprint as hard as you can and then settle back into a steady pace, over and over again at the drop of a hat. There is a similar aspect of endurance and sprinting capability.”

When she’s not managing a Starbucks near Dayton, Ohio, Jane trains 15 hours a week, averaging 20 mph. In July, she won the 2011 Ohio State Criterium Championships. And she’s only getting started. 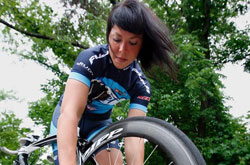 Jane Weakley prepares her bike for a training ride in Dayton. Photo credit: Jan Underwood for the Dayton Daily News