Kirk Wesselink '84 released a new book in Spring 2010, “Advancing the Watch,” that addresses biblical prophecy. His hope is that a new generation will be challenged, trained, and encouraged with a powerful, look at the fullness of God’s prophetic Word.

Wesselink earned a B.A. from Cedarville University, Cedarville, Ohio, and a Masters in Religious Education from Grand Rapids Baptist Theological Seminary, Grand Rapids, Michigan. As a pastor and church planter for over 23 years, he has spoken at youth camps, conferences, and churches in the Southwest and Midwest States, and even in churches and Bible schools in Cuba, Peru, and India. 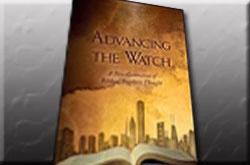