The Institute of Navigation’s (ION) Autonomous Lawn Mowing Robot competition gave Cedarville students an opportunity to take a robot from planning to programming to product.

The competition has simple roots: “Wouldn’t everybody want their own lawnmower that you could just turn lose?” Clinton Kohl, Ph.D., advisor for the team, said.

The focus of the competition was not only building a robotic lawnmower, but also doing it affordably. “If this mower costs $50,000, you could just put $50,000 in a bank, escrow it and pay a lawn service for the rest of your life,” Kohl said. “No one is going to buy that. But you might buy a $5,000 lawn mower. That’s more realistic.”

The competition challenges students to design an autonomous robot that can rapidly and accurately mow a field of grass. The field is arranged in a rough “L” shape and includes the added challenges of a fence, a remote controlled dog and a flower bed. The robot not only has to remember where it has mowed previously, but also must be smart enough to avoid the course obstacles.

According to Kohl, the difficulty in the competition is in keeping the robot doing what it’s supposed to be doing. A human could look and see where the lawn has already been mowed. But for a robot, that idea is much more complex. The robot has to be able to sense its environment while keeping within the boundaries set up for the competition.

The students began preparation for the June competition early in the year. The team met weekly throughout the year to continue their work. C++ programming, debugging and research each played an important role in developing the robot. During the month of May, the team began to meet nightly to complete final preparations.

“One week you may be solving a problem and making forward progress and the next you may be scratching code and going back to the drawing board,” team member Sarah Norris said.

Cedarville’s robot used an odometer to keep track of how far it had gone, a compass to give orientation information, a video camera to keep track of the boundaries and a specialized bumper equipped to recognize touch.

The competition gave the team an appreciation for the human body. “God gave us a whole lot of sense with our bodies, our eyes, our ears,” Kohl said. “To try to duplicate that in a nonliving being is a challenge.”

Finally, the day of the competition arrived, the culmination of a year’s worth of effort. “It’s not terribly unlike sports,” Kohl said. “You train a long time and then you play the game. You have one match. You’re spending your entire time preparing, testing, trying, going back, rewriting and testing again. Then the day of glory comes and you put your robot on the line.”

According to team member Nicholas Kerner, the team had to overcome several problems just before the competition. “We had multiple tornadoes during the month of May, which is our primary testing month, two wires which should not have been connected became connected and caused the remote to the robot to cease functioning, the front bumper of the robot was damaged shortly before competition, a good sized portion of code was corrupted without a backup and all of the pieces for running the robot did not come together until the night before the competition.”

Despite these setbacks, the team pressed on to get the robot ready as best they could.

According to Norris, the day of competition was very nerve wracking. “We all knew that this day could go really great or really badly as you can never make code perfect or foolproof,” she said.

“Our turn finally arrived and we were glad to see that our robot mowed the hardest parts of the field perfectly, but it then failed on the line follow portion of the competition — something that had not happened before,” she said. In between the mowing runs Norris and Kerner were able to write a new algorithm to fix the error.

After the improvements, the robot made a more successful second run and mowed a majority of the grass. The team finished in 4th place overall and 2nd for the undergraduate teams.

Kohl said the main purpose of the competition is what the students learn from it: “I want them to be growing in their professional skills in a practical, real-world kind of problem,” he said.

Norris recognized the opportunity to learn these skills outside the classroom: “Competition teams are focused on cultivating thinking, of empowering students to find not the ‘right answer’ but finding a solution that will make it work. For competition teams it is not about a grade — it either works or it doesn’t work.” 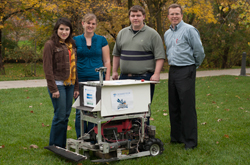