Cedarville University’s student life organization organized a Barefoot Thursday event on September 8 at Cedarville University’s campus and collected 3,276 pairs of shoes, their goal being 3,220 pairs. The shoes will be taken to Liberia by Palmer Chinchen, author of True Religion, and distributed by Chinchen and volunteers to those without shoes.

The idea of a Barefoot Thursday event at Cedarville began over the summer as a discussion thread on the class of 2015’s Facebook page. Each incoming freshman was required to read Palmer Chinchen’s book True Religion before they came to Cedarville this fall. The book challenges individuals to live a life of utter selflessness; a life that pours out love to others through stepping out of our comfort zones and letting God use us in unbelievable ways. At the end of each chapter is a section titled “Ideas for Becoming the Expatriate.” Hosting a Barefoot Sunday was one of the many ideas in the book.

Carl Ruby, vice president of student life, said the new freshman class is “anxious to make a difference and very sensitive to the needs of the poor.” Ruby said he is encouraged by the “new spirit of volunteerism” among these students, and he said he is encouraging the students to use this experience as a model for future events over their next four years at Cedarville.

“We talk a lot about being a Christ-centered University,” Ruby said. “This gives us a chance to back up that claim with actions, and I think these students are doing something that Jesus would be doing if He were here.”

Chad Smith, one of the freshmen who started the event, said this book helped him realize “that there are millions of people who have legitimate needs that need to be met.” Smith, aspiring to become a pastor one day, says that his outlook on life has changed. “I now want to meet people’s needs,” Smith said. “I now want to ‘do love.’ I now want to bring pieces of heaven to places of hell on earth.”

“The purpose of this event is for everyone to realize that we each individually need to do our own part to help a hurting world for God,” said Kaitlynn Sinclair, the freshman spokesperson for the event. “When we each do our individual parts together, we achieve so much more than we can ask or imagine.”

Echoing Sinclair’s vision, Palmer Chinchen says in his book True Religion that he hopes to bother people. He says he wants people to live differently and to care more about others than about themselves. “Your one life is critical, invaluable,” Chinchen said. “God put you here to do certain good for him that no one else will. And as a people, or a college, when we pool our abilities and resources we can do impossible things for Christ and His kingdom.”

On September 8 students collected shoes to send to Chinchen to distribute to those who need shoes in Africa. New or gently used shoes were collected and placed in the front of the auditorium in the Jeremiah Chapel of the Dixon Ministry Center. Cedarville’s student life department is also collecting monetary donations to assist in the cost of shipping the shoes, which will be about $2,600. Student Life is asking for cardboard box donations for shipping the shoes. The shoes will travel from Cedarville to Chinchen’s church in Chandler, Arizona. They will then be unloaded and reloaded into an overseas shipping container and travel by ship to Liberia. Finally, the shoes will be reloaded into smaller boxes and strapped onto motorcycles to be delivered to individuals across Liberia.

Students are reaching out, sacrificing a comfort we take for granted every day: the privilege of wearing shoes. They hope to inspire individuals around the world to join the movement of radical love by choosing to make a difference. 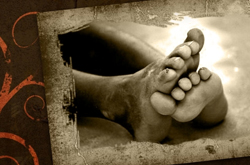