Recent Cedarville graduate Leanna Baumer was published in the spring edition of “The Pi Sigma Alpha Undergraduate Journal of Politics.”

Baumer produced a senior research paper entitled “International Land Acquisitions in Sub-Saharan Africa and the Threat of Neo-colonialism” about investing states leasing or buying land in hunger-stricken areas of Africa to produce goods for their own domestic food needs. She proposed the idea that these land deals could reshape Africa’s economy and revive a form of “neo-colonialism,” yet she ultimately concluded that describing the politics as neo-colonial was an oversimplification of negotiations between sovereign wealth funds, investing states and host countries.

Baumer cites the danger of such transactions saying, “My hope is that students of international development will recognize the consequences of African officials signing over rights for long-term access to their most important natural resource — land.”

Interest in agricultural policy issues of this sort stemmed from Baumer’s own childhood spent raising sheep in a rural farming community. She plans to continue exploration of international agricultural issues at a graduate level; but for now she continues to see the ramifications of agricultural strategy up close in Missouri’s public policy realm.

Baumer submitted the paper to the politics honors society journal along with 63 other students from prestigious schools across the nation. She is grateful for the help from several professors in the department of history and government, including her advisor, Mark Smith, Ph.D. and Thomas Mach, Ph.D., the department chair. Her project was one of four chosen for the publication and is shown with articles from Purdue University, the University of Wisconsin and the University of Memphis. 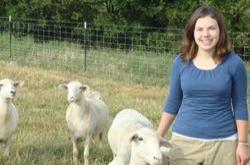 Recent Cedarville graduate Leanna Baumer was published in “The Pi Sigma Alpha Undergraduate Journal of Politics.” She is pictured here on her family’s farm, where her interest in international agricultural issues began. Photo supplied by: Leanna Baumer