In addition to producing graduates with real-world experience, Cedarville also provides students with a rigorous education that turns them into thinkers and allows them to create well-respected scholarly research.

Katy Hawkins, a senior philosophy major, presented a paper at the Midwest Regional Meeting of the Evangelical Philosophical Society (EPS), an organization of professional scholars devoted to pursuing philosophical excellence in both the church and the academy. Hawkins’ paper, titled “Evolutionary Justification for Belief in Moral Realism,” won the EPS undergraduate paper competition.

“Hawkins was the clear, unanimous committee choice on the EPS side,” says Tim Erdel, chair of the EPS Midwest Region Student Paper Contest Committee. “Other Cedarville students also showed excellent promise in philosophy. That Cedarville has several students of such caliber speaks volumes of the program and the philosophers who teach in it. No other school had remotely that kind of representation. For the second straight year, the best undergraduate paper was better than the graduate award winner.” 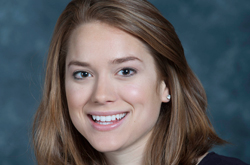