Cedarville students from the past three academic years have worked to provide a solution to the problem of high-cost medicine faced by missionary hospitals. Missionary surgeons in third world countries face the challenge of treating many patients with limited equipment. One specific surgery they often perform is an intramedullary (IM) nailing procedure to treat a femoral fracture.

Tenwek Hospital in Kenya, Africa, uses the IM nailing method as its preferred choice for fixing femoral shaft fractures. The hospital treats several of these fractures a week as a major referral center for severe orthopedic injuries. After learning about the high cost of femoral nails, a team of Cedarville senior mechanical engineering students during the 2008-09 academic year began working to lower these costs.

The first team consisted of now-alumni Garret Noble, Trenton Simon, Jace Carter and Matthew Hollis. The team built a foundation for future teams by reverse engineering an existing nail and obtaining quotes for manufacturing their design. The team set a goal of reducing the cost to $100 per nail. Although the team made significant progress, they were unable to meet their aggressive goal and bring the implant to manufacturing.

During the 2009-10 school year, a second team was formed consisting of students Sarah Robbins, Andrew Yoakam, Chris Walker, Kurt Groman, Elizabeth Flow and Jordan Leman. The team had the task of optimizing the previous team’s design for manufacturing. This team set a new goal of reducing the price of manufacturing to $150 or less per nail.

The 2010-11 team consisted of two students: Leah Pernicano and Erik Kane. They worked from the foundation built during the previous two years to bring the nails to manufacturing.

“When I began working on the project, I had to spend a lot of time learning about the previous team’s work and the current status of the project,” Pernicano said. Once the team understood where the project had come from, they were able to begin their own work.

After establishing the complete manufacturing process, the team began the process of seeking ways to reduce the manufacturing cost for new nails. This process involved asking possible manufacturers for design modifications with the potential to lower production costs, analyzing these modifications, implementing them if possible and reiterating on those designs.

The team evaluated every design modification for its effect on the strength of the nail to ensure that the implant was safe for patients. They evaluated the strength and safety of each design by running a stress analysis on a computer model.

The team came to a cost estimate of just above $200 per nail. While the value wasn’t within their original goal of $150, it was well below the cost of an existing IM nail, which is over $1000 per nail.

In addition to working on manufacturing new nails, the Cedarville teams were also working to remanufacture nails that had been donated to the program. In the beginning of the fall semester the 2009-10 team was given 160 nails, 80 of which were too long for most of the African patients.

The task of remanufacturing the donated nails was completed this past summer, and the nails were sent to Tenwek Hospital in July to be used by the missionary surgeons there.

Recently the teams learned that the reengineered nails were put into use by Galat. The first Cedarville nail was provided to a young man named Cornelius.

“Our patients, for the most part, are coming from homes where subsistence farming is the source of life and income,” Galat said. “These inexpensive implants, which only require small incisions and promote faster bone healing, are similar in design and placement to implants that are being used in the developed world even today.”

“Tenwek Hospital orthopedic department is most grateful for the efforts of Cedarville biomedical students from 2008 through 2011 who have invested their time and energy to this project,” Galat said.

Additional manufacturers are currently being sought to manufacture complete nails. “We are not far from producing our own medical device that can be widely distributed to hospitals in developing nations,” Tim Norman, Ph.D., professor of engineering and team advisor, said. 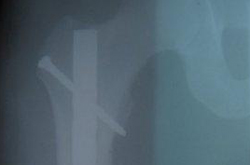 Recently a femoral nail reengineered by Cedarville students was used successfully on a young man at Tenwek Hospital in Kenya. Photo courtesy of Dr. Timothy Norman