"Every day was tough – having to live within another culture, realizing how American I am, and learning patience,” said Melissa Stoltzfus, ’13.

She and three other Cedarville University students travelled to Uganda for the 2010 fall semester as part of the course offerings through the Office of International Programs. There they found hope in a hurting land and learned more about the country, the people, and themselves.

The semester offered two unique tracks of study, and Stoltzfus, a sophomore psychology major, participated in the first track: Intercultural Ministry and Missions Emphasis (IMME). Students in IMME live with host families throughout the semester while taking a few classes every day.

“Living there wasn’t all exciting. It’s just life,” she said. She walked 40 minutes to school during the weekdays and spent all Saturday doing laundry. Through this, however, she learned a lot about herself and about relying on God.

A break from the day-to-day living brought Stoltzfus and 13 other IMME students to Northern Uganda where they observed child mothers full of hope after being physically, sexually, and emotionally abused. The students looked on as the child mothers were counseled and received spiritual guidance as well as vocational training. They found hope emerging out of hopeless situations.

The students learned that some of the women had been subjected to witchcraft and felt great relief that the Holy Spirit was present and real in that place. “Nothing but the Holy Spirit can overcome that,” she said.

A Day in the Life

The students in the Uganda Studies track lived in dormitories with other American and Ugandan students but only took one class per day. After class, Cassandra Winner, ’11, Alayna Diebold, ’12, and Elizabeth Walton, ’12, worked as interns in three unique organizations.

The Off-Tu organization provided Walton with the opportunity to teach at a school full of pre-kindergarten through 5th graders. “Sometimes I felt like I wasn’t really having an impact at the school, but as I left, I was really able to see the change for the better,” she said.

She provided enrichment activities including teaching Physical Education, Health, and English classes. She would also sing and read with the children.

In addition, Walton worked at a children’s home and built strong relationships with the 12 kids, some of whom had birth defects or disabilities and most of whom had been orphaned, abandoned, or were victims of extreme poverty. “There was such a hopeful atmosphere at the children’s home, and the staff at Off-Tu was committed to seeing the kids through to independent adulthood,” she explained.

Walton participated in an outreach effort to the boys and girls in the Naguru Remand Home which functioned as a Juvenile Retention Center. Walton and other students took every opportunity to share the Gospel with the children – many of whom had been convicted of the crime of homelessness.

“It was hard seeing the kids who were homeless, just knowing the adversity they faced and the way the world in general seemed to be against them.” Through her times at the Naguru Home, Walton felt a strong conviction for the lack of gratefulness she showed in her own life.

Winner taught daily living skills at Salama, a boarding school for the blind. The children could not contribute to society because they were viewed as “not good enough” according to the culture.

“I felt that as a follower of Christ I really needed to show the children they were valued by me, but especially by God.” She enjoyed spending time with the children while helping them do their laundry, reading, or gardening.

“I also talked to them a lot about their future plans, trying to get them to understand they would be able to contribute to society and that no matter what others said, they are worth Jesus dying for them,” she said.

The four women stopped their work to spend their weeklong Fall Break living out in the bush. They each had one backpack with essentials and a sleeping bag and were dropped off at a compound of small huts in what felt like the middle of nowhere.

This was their home for the next week.

Each was assigned to a family that taught them the lifestyle of the community. Three of the women were sent to the plains. Each day was filled with cooking, washing dishes, laundry, and visiting friends. They enjoyed this time to relax and orient themselves to a more basic way of living.

“It really made me reevaluate the busyness of my own life and ask myself what the point of our upwardly-mobile, always-moving society really is,” Walton said. This is one experience, she explained, that will never leave her.

Stoltzfus was sent to the mountains where her days were very similar to the others. However, she lived with Fair Trade coffee growers that shared with her the positive and negative aspects of the business.

The coffee growers are encouraged to work hard to make good coffee. The profits give them security and allow their children to have better education.

However, the coffee growers also explained that some corporations working under Fair Trade can cheat the farmer out of their hard earned money by forcing them to sell at a lower price. Although Stoltzfus’ host family had never experienced this personally, the possibility remains.

Another adventure took the girls on a week-long trip to Rwanda where they saw firsthand the impact of the genocide and the reconciliation thereafter.

Stoltzfus was surprised to learn that just a year before the genocide, Rwanda had been named the most Christian nation in Africa. She explained that some people blame Christianity.

After wrestling with this thought, she came to a conclusion. “Is Christianity ineffective? No, they weren’t following Christ,” she said. “Being there you realize they need Christ for reconciliation.” This encouraged her faith to grow even stronger.

Walton developed a stronger faith after seeing the reconciliation between such strong and violent enemies. “If Hutus and Tutsis can live together now after this huge tragedy happened, how can I then hold grudges and maintain bitterness about such insignificant things?”

After visiting Rwanda, the women realized how disconnected Americans are from the rest of the world. “Americans are not disconnected from the genocide but from the idea that as humans with racism and prejudice, we are all capable of doing what the Rwandans did,” Stoltzfus said.

Walton and Winner both realized how out of touch they were with the world news after visiting Rwanda. This challenged them to be more intentional, and now they stay as up-to-date as possible with national and international news.

Each opportunity the four women encountered gave them real-world experience in their field. Even daily living in a foreign country had its educational moments. Winner explained that she learned how to roll with the punches and be more flexible. “Going into something new, I will be more aware that I don’t know anything.”

Walton learned patience, flexibility, and compassion. She realized the importance of “truly understanding what people go through and creating legitimate ways to help.”

Each of the women strongly encourages others to take the trip that so thoroughly impacted their lives. “It’s an opportunity of a lifetime,” Winner said. 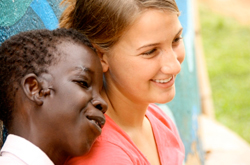 Cedarville students travelled to Uganda where they found hope in a hurting land and learned more about the country, the people, and themselves.