Cedarville University’s Integrated Business Core (IBC) has been running for 10 years, and is a well-established part of the business program. This program is a series of three business classes combined with a business practicum, during which students are expected to apply the principles that they are learning to an independent, student-run company.

In previous years, the IBC was divided into two or three independent companies, each with its own product. This year, the program’s format was changed to represent a different approach to business.

Chase Summerlin, junior marketing major, is the CEO of Chasing Innovations, this year’s IBC company. “Our company’s goal was to be the most profitable group in this program’s impressive history. In order to achieve this goal, we felt that the best strategy was to consistently identify and meet the needs of the Cedarville University family, which led to the creation of three small business units (SBUs).

“We are all one company,” Summerlin said. “However, each of these three product/service lines operates independently of the others. Each of the three SBUs runs the operations for a different product or service, but all of our profits are combined at the end to go to one nonprofit organization.”

The three units, Beyond Measures, Beyond the Bubble and Beyond the Hour, serve different perceived needs in the Cedarville community. Each unit developed its own product or service and applied for separate business loans from real lenders.

Beyond Measures was set up to help students who are bored with the food options in the dining hall and want to make their own food out of available ingredients. Michelle Mead, junior marketing major, serves as the president. “I had always wished there was some way I could learn of new things to cook in Chuck’s (the university cafeteria),” she said. “Joining the IBC allowed me to make this desire a reality for myself and other students on campus.”

Beyond Measures produced a cookbook with the Cedarville dining hall in mind. The cookbook started with 80 recipes and, through recipe submission contests, has grown to over 100. For $3, students gain access to the online cookbook.

Beyond the Bubble also addressed a food-related problem on campus with a different approach. “One need that showed up in almost every group’s finding was the need for more food options,” said Stuart Li, junior accounting and finance major, president of Beyond the Bubble. The team brainstormed ideas to meet the need, and decided on a food delivery service.

Beyond the Bubble took orders for several favorite restaurants and made deliveries several days a week directly to students’ dorm rooms. “One of the biggest challenges for Beyond the Bubble specifically was the Friday before we launched the company,” said Li. “We were in communication with Chipotle Corporate when we found out that not only were we not allowed to use their brand name in any of our print media (hence the fact that we always say “Burritos from your favorite Mexican restaurant”), but we were also not even allowed to deliver from them. The first week of sales came with dismal numbers. We finally did work it out with the local Chipotle to still cater for us, but it was a very tough first two weeks of business just trying to push Chick-fil-A.”

Beyond the Hour focused on an entirely different need. “Cedarville is known among the Christian community for bringing in great speakers for our chapels,” said David Haywood, junior international studies and global economic/business major and president of the company. “We decided that it could be beneficial for those outside Cedarville, such as parents of students and alumni to hear the great chapel messages. Beyond the Hour provides some of the best chapel messages in the past decade.”

The company provides eight sets of messages to choose from, each containing four messages from past speakers. The categories include Inspirational Testimony, Alumni and Ministries as well as bundles from prominent speakers such as Dr. David Jeremiah.

All three SBUs have combined their profits to support InsideOut Ministries in Springfield. InsideOut Youth is an after-school program for inner city kids, providing a gym, food and games to keep young people off the streets after school. Part of each IBC student’s grade is dependent on volunteering at least 10 hours of service with the ministry, during which they will play with the children or assist in the cafeteria.

“Another way we help them out is by donating 100 percent of our profits to InsideOut Youth so they can fix their gym,” said Haywood. “The gym is the main attraction that keeps the kids coming to the program and it needs to be refurbished. Being able to provide the funds for that has been the motivation for us to work hard.”

The overall profit goal of Chasing Innovations is $7,000, an amount that would make them the most profitable IBC team ever. 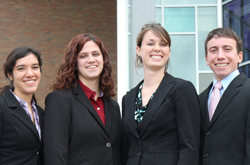