In past years, Cedarville teams have performed well at the event and have often brought home awards; the 2011 team continued the tradition. Competing against significantly larger universities, Cedarville’s 12 Model U.N. team members walked away with an impressive six awards, including three of the top four “Outstanding Delegate” awards.

At the Model U.N. event, students play the role of U.N. delegates from various countries, staying faithfully in character as they accurately represent each country’s national interests or policies and negotiate solutions to a wide variety of global problems. In 2011, Cedarville University represented China, Pakistan, Turkey and Vietnam.

At the conclusion of the conference, the Dayton Model U.N. staff nominated the top performers in each of the four committees for awards recognizing outstanding negotiating skills.

Joining the list of award winners were Katy Hawkins, representing China in the Security Council, and Amanda Turbett, representing Pakistan in the General Assembly.

The twelve Cedarville team members put in many hours of preparation, convincingly played their diplomatic roles at the conference, and were influential framers of the final resolutions passed by each of the committees. All deserve recognition and appreciation for their superior diplomatic skills and impressive representation of Cedarville University. 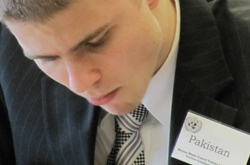